Looking at the world through a tone-colored lens

Photographer Cory MacNeil grew up in Salt Lake City, Utah. In high school, he had friends who were photographers and though he said he was impressed by their work, he wasn’t tempted to pick up a camera himself until early in his 20-year stint in the U.S. Army.

“I was serving in Germany when someone let me hold a nice DSLR camera. I thought, ‘Wow. This is the real thing,’” he said. “My wife and parents bought me my first camera for Christmas.”

That was 17 years and hundreds of thousands of photos ago.

Cory retired from the Army in the summer of 2020 and by August 24 he and his wife, Tricia, had packed up their house, visited family and moved with their children, Jeffrey and Agnes, to Columbia with enough time to explore the city before he began a three-year doctorate degree in media sociology.

"During my first semester I was on my way to a class when one of the [Mizzou Botanic Garden] gardeners pulled up behind me in a Kubota and started watering the flowers. It was in that moment that I realized it takes people to make this campus look so beautiful,” MacNeil said.

“I thought that over for a few more days and considered doing a one-day project following a single groundskeeper. As the semester progressed, the idea flourished into a plan to spend one day a week taking photos during the summer semester,” he said.

For ten Mondays, MacNeil shadowed landscape services gardeners as they went about their jobs taking about 800 photographs each day. He selected a dozen of the roughly 8,000 black and white photos to print and mat for an exhibition that debuted at Mizzou Botanic Garden’s (MUBG) 2021 Jacquelyn K. Jones Lecture, after which the collection was mounted on the main level of MU’s Walter Williams Hall.

“I grew up with a backyard garden, but that was so long ago that I had no lessons to pull from it during this project,” he said. 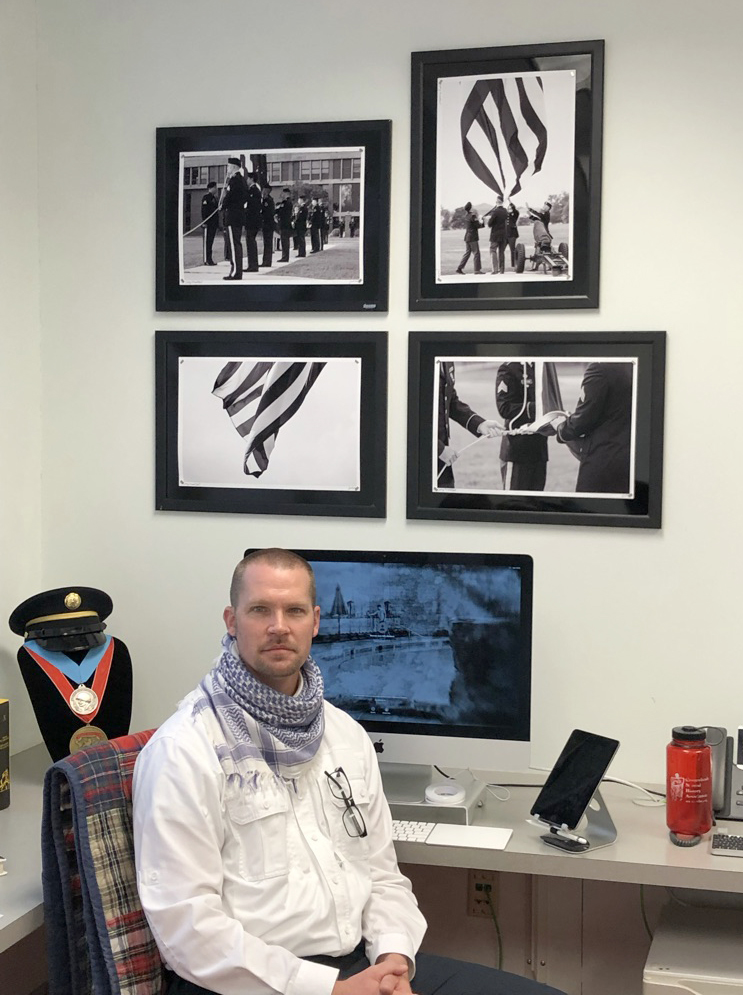 Above photographer and MU doctoral student Cory MacNeil’s desk in Walter Williams Hall are four photos from a series he took in July 2018 at Fort Mead, which MacNeil said are his favorite all-time images.

After he started taking photos, MacNeil said he spent a lot of time in libraries looking at photography books on topics as diverse as shooting specialty subjects to things like lighting and color theory.

“I kept drifting back to photo journalism and thinking, ‘I wish I had been the one who took this photo.’“

“I haven’t taken a color picture in five years,” he said, explaining that duChemin advised color can be so attractive that it can hide the flaws in photos.

“[duChemin} put on a show I was able to see — on the importance of printing. My photography took a huge leap forward,” he said. “I set a bar: is it worth all the work to print? Am I going to put that photo on paper with ink? It became my new rubric of a good photo.

“At almost no cost, I can share a photo electronically by text or email and it’s published,” he said.

“I print two photos every Saturday. I keep one and give one away. A photo coming out of the printer an inch at a time is the greatest feeling,” MacNeil said. “Giving a photo away, sharing a print, is the second best.”

When asked if he had a favorite subject or photo, MacNeil said that a series of ten photos he took in July 2018 at Fort Mead were his favorites. Four from that series, which documents the raising of the flag on the Fourth of July, hang on his office wall. He said he attended 30 days of staging and participant practice before the actual event to gauge composition before taking photos that day.

“I love the geometry. Straight and tall. The Command Sergeant Major Potter looking at his watch. The flag up and down. All converging together,” he said of the series. “It all works so well in black and white.”

MacNeil said he is deeply interested in how people push and pull each other through Journalism.

“Not what was printed in the New York Times today but what was happening when the photo was taken,” he explained.

His current project centers around interviewing photojournalists who have spent time photographing war and combat and how they see their own work having an influence — or not.

“I’m looking at the overall experience,” MacNeil said. ‘What did you think were the most important people, events and circumstances, and has that changed over your lifetime as you’ve matured?

“I sometimes get a really interesting reference to a photo taken with a particular message.”

MacNeil said his MUBG project photographing gardeners worked out perfectly. He hasn’t yet decided what his next photo essay will be but said he intends to get further out into the community to explore possibilities.

Reflecting on his post-doctoral future he said, “In a perfect job, I will still have time to go out and do personal work.”