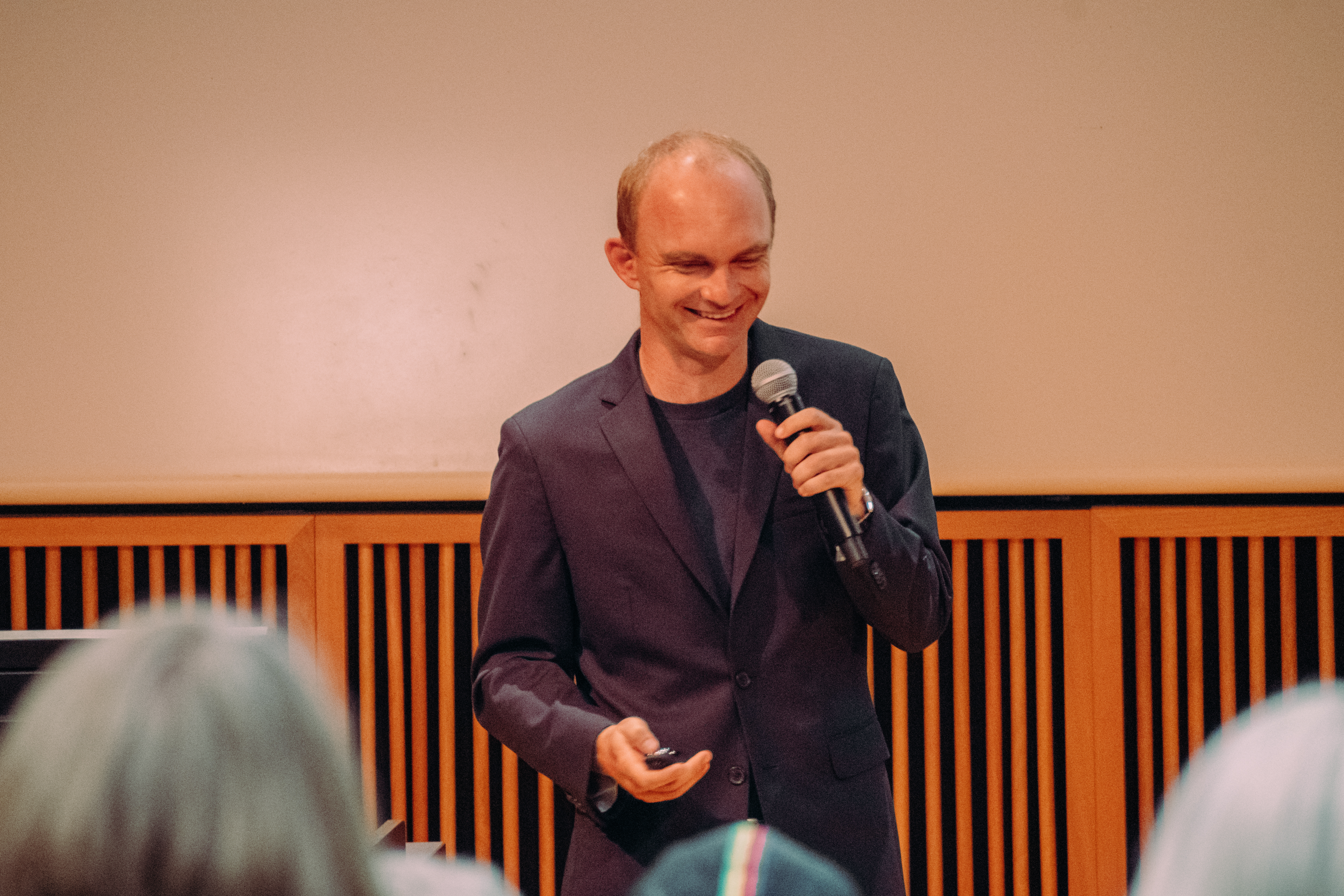 “Birding Without Borders” author — and birding rock star — Noah Strycker shared both fascinating and humorous anecdotes about his year-long birding trip to 41 countries during which he documented more than half of the world’s bird species.

Noah Strycker visited 41 countries and broke a world record by logging 6,042 species of birds during his research for the book “Birding Without Borders.”

But Strycker, who spoke Friday evening at MU’s Monsanto Auditorium during the 2021 Jacquelyn K. Jones lecture hosted by the Mizzou Botanic Garden, always strived to make his journey as much about the people as the birds.

“I knew from the very beginning, this is obviously going to be a very international trip and scale, but I still wanted to keep it as local in scope as possible,” Strycker told the group. “So I set a couple of special rules for myself. Every bird I found would have to be witnessed by myself and at least one other birder. Second of all, all of those other people would have to be locals living in the same country that I was visiting.”

Establishing these rules resulted in Strycker meeting hundreds of “like-minded bird nerds” across the world, he said.

Strycker’s appearance was the highlight of the evening, but many others shared their stories of birding. While the sun was setting Friday, the foyer of MU’s Bond Life Sciences center could be seen from across the street. Its clear glass exterior harbored a warm light, in which people browsed the books, raffle prizes and professional photographs displayed inside. 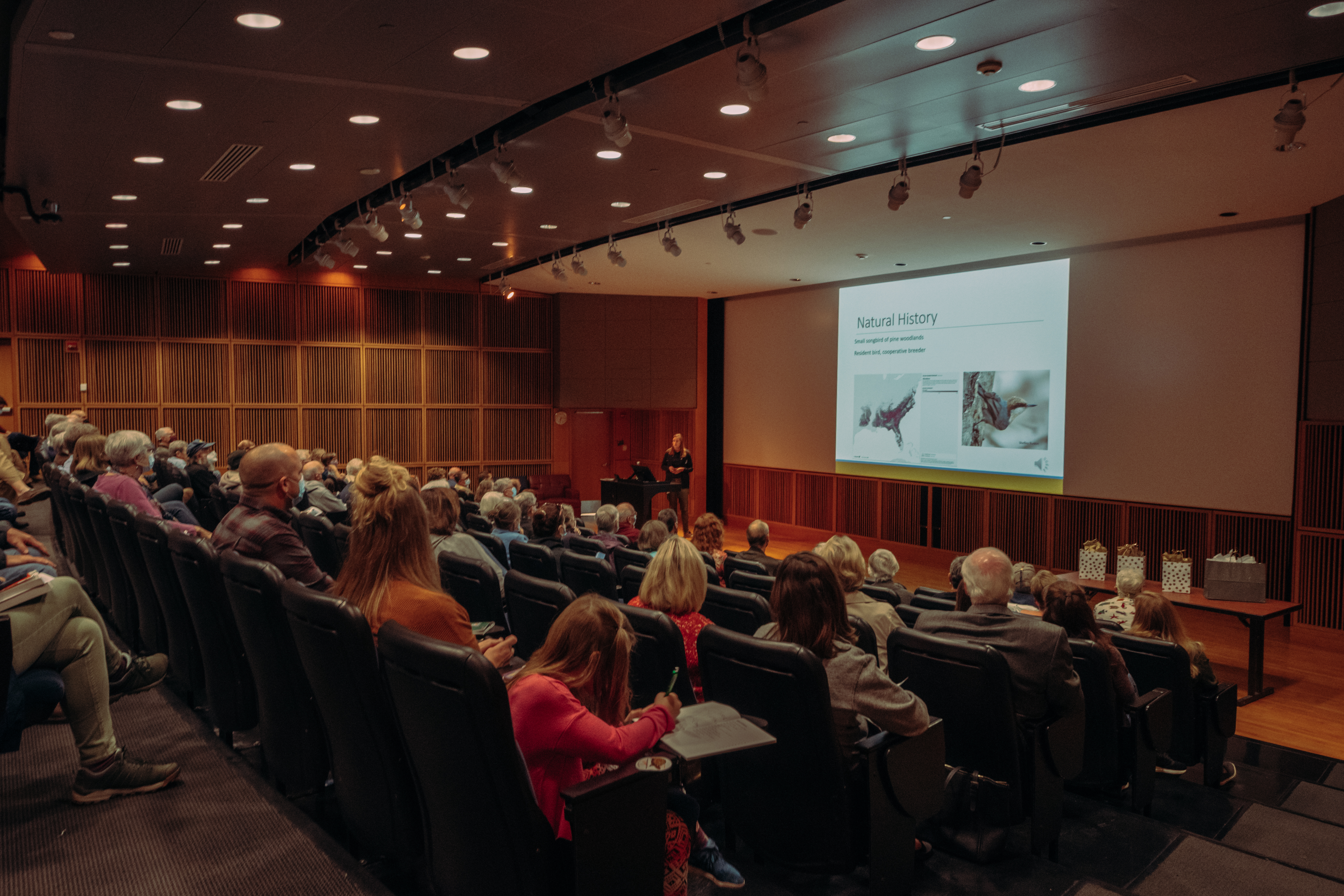 Missouri State Ornithologist Sarah Kendrick discusses MDC’s efforts to reintroduce the brown-headed nuthatch to the state. Her recording of the bird’s call which, “sounds like a rubber duckie” drew laughs from the audience.

A decent crowd, skewing older and wearing a rainbow of cloth masks, filed into Monsanto Auditorium at 6 p.m.

Sarah Kendrick, an ornithologist with the Missouri Department of Conservation, presented her work reintroducing the brown-headed nuthatch to Missouri. The bird, she explained, was extirpated in the state when loggers removed many of the short-leaf pine trees in the early 1900s.

“When we talk about short-leaf pine woodland restoration,” said Kendrick, “we don’t just want to talk about the habitat. Ecosystem restoration also means bringing back some of the species we may have lost along the way.”

The birds were placed into cardboard mailing tubes with five mealworms each, then flown in a small aircraft to Mark Twain National Forest in Rolla.

English Professor Pete Monacell imparted his experience as a member of the Missouri Bird Records Committee and reviewer for the birdwatching database Ebird, where birders can log their sightings of different species. The site has hundreds of thousands of users and more than 500 million sightings recorded. “I actually didn’t discover my passion for birds and birding until about five years ago, and that escalated quickly,” said Monacell. “So, as my friend Sarah Kendrick is fond of saying, birds are awesome.”

A loud “YEAH!” erupted from the front section, where Kendrick was sitting.

Strycker shared many stories from his travels. He had various vehicles break down on him in Peru, and in Taiwan a lost Siberian crane his group found became a national celebrity. 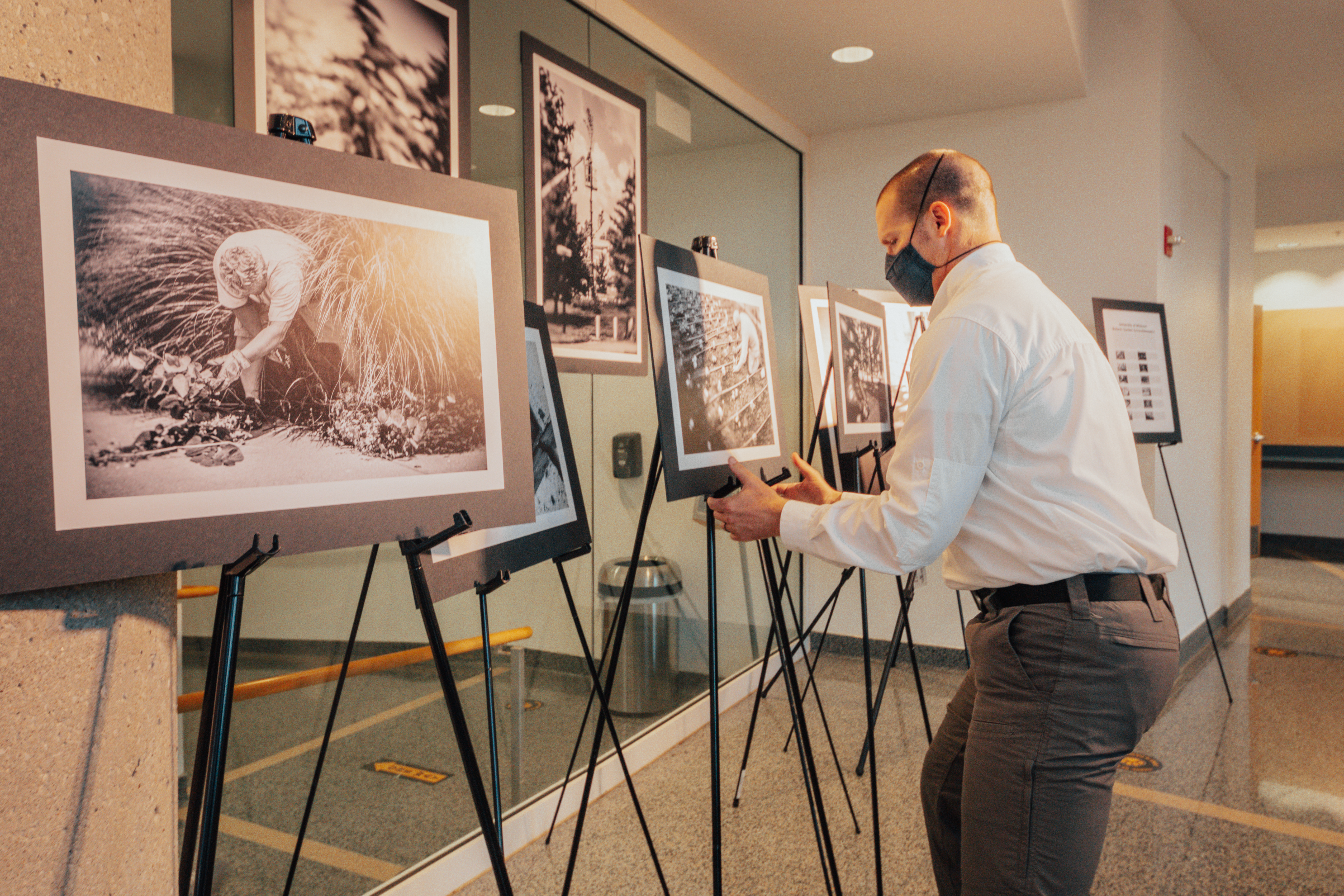 Journalism doctoral student Cory MacNeil exhibited a selection of his artful, black and white MUBG-themed photos at the event.

The birding community, according to Strycker, is supportive and generous just about anywhere. A birder in Iceland stayed up all night birding with him after his flight arrived late, only to drive five hours back to work in the morning. Another man in eastern Australia read about Strycker’s endeavor in the morning paper, looked for his number and gave him a call, saying he could direct him to the family of cassowaries on his property.

“It doesn’t matter who you are or where you’re from,” he expressed. “There are birds all over the world. And so anyone can get into looking at birds and connecting with them, and connecting with each other. And that means that, in the end, this world really has no borders at all.”

After Strycker’s speech, the speakers and hosts convened in a panel to answer audience questions. Strycker was gifted a notebook bound with elephant dung paper, and the group laughed and joked with the audience as they told more stories.

Toward the end, every panelist was asked to describe the event that sparked their passion for birding. The answers were strikingly heartfelt; when each person spoke, it felt as though they were alone onstage under a single spotlight.

Monacell’s story was practically tearjerking. Five years ago, after moving from Columbia to Jefferson City, he struggled to feel at home in the new house. Noting this, his wife bought him a bird feeder. “I sat there and watched, and in fly these chickadees, and I couldn’t believe that there were actually birds coming into my feeder. It happened within minutes. And I just watched and watched, and more birds kept flying to the feeder and visiting the feeder. And wouldn’t you know, it worked. I started to feel more connected to my — to my home.”

It was only a matter of time before Monacell began utilizing a field guide and became excited when he could identify the species.