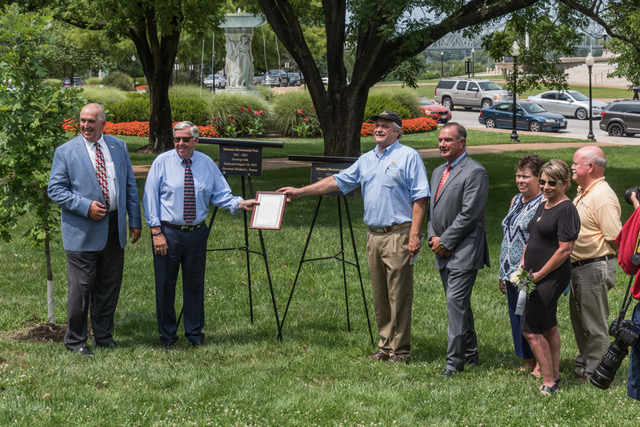 On a typical hot and humid Missouri afternoon in August, two of Mizzou Botanic Garden’s (MUBG) Legacy Oaks took their place in history on the south lawn of the Missouri State Capitol as part of the state’s bicentennial celebration. 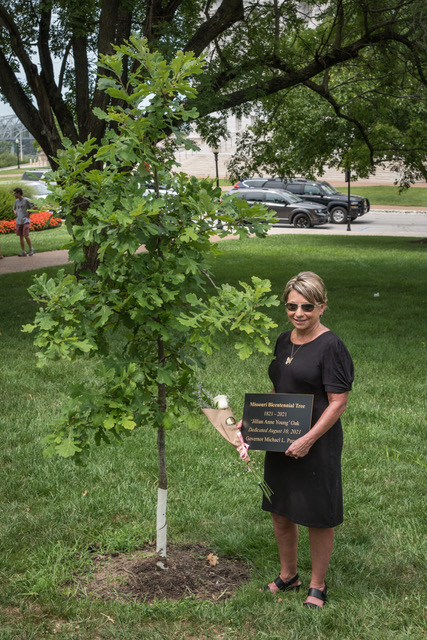 Kim Lovelace Hainsfurther of Forrest Keeling Nursery – who along with her Father Wayne Lovelace gifted the Legacy Oaks to MUBG – poses by the ‘Jillian Anne Young’ oak (Quercus bicolor x lyrata x macrocarpa) planted at the Missouri State Capitol in celebration of Missouri’s bicentennial. This oak holds a special place in her heart as is named for her daughter Jillian, who passed away in 2013.

Typical of white oaks, the two selected for this honor from the Legacy Oak specimens now growing on MU’s South Research Farm in anticipation of replacing the dwindling pin oaks on MU’s Francis Quadrangle, have projected lifespans of 200 years. An overcup oak (Quercus lyrata) and ‘Jillian Anne Young’ oak (Quercus bicolor x lyrata x macrocarpa) will provide stately profiles against the backdrop of the Missouri Statehouse and provide shade for generations of legislators and visitors.

Sassmann welcomed the crowd and Kehoe praised the work of MUBG Friends board member Bill Ruppert as facilitator of the initiative before introducing Parson.

Before reading from an official proclamation about the event, Parson spoke to the gathering.

“Missouri wouldn’t be Missouri without oaks,” Parson said, noting that for those growing up in rural areas of the state, as he did, oak trees are ubiquitous. He shared a humorous anecdote from a recent visit to Marshall, Mo. about the city’s well-known canine star and three of Missouri’s most common trees.

“Jim the Wonder Dog could tell the difference between oaks, hickories and cedars,” he said, drawing a laugh from the crowd.

“For all of us here, we get to see these trees today but imagine what it will look like in 100 years and 200 years,” Parson continued. “Imagine all of the people who will get to sit under them.

“Oaks are important [to Missouri] for a number of reasons,” he said, alluding to the ecological, environmental and commercial impact oaks have on the state.

Before introducing representatives of groups and organizations on hand for the dedication, Ruppert noted that the effort was 18 months in the making and noted that “The Big Tree”, a 400-year-old bur oak growing in a field in McBaine, Mo. was here when Lewis and Clark made their way across the state.

Temporary plaques recognizing the trees as Missouri Bicentennial Native Oaks were unveiled and a copy of the proclamation was shared with MUBG. Sassmann ended the ceremony with a quote from Aldus Leopold’s “A Sand County Almanac”.

“Acts of creation are ordinarily reserved for gods and poets,” he said, “but humbler folk may circumvent this restriction if they know how. To plant a pine, for example, one need be neither god nor poet; one need only own a shovel.”

“We are pleased and honored that two of Mizzou Botanic Garden’s Legacy Oaks featured so prominently in Missouri’s bicentennial celebration,” said Millier of the event. These trees will continue to serve as arboreal ambassadors in their new home on the grounds of the state capitol for many years to come. We are grateful to all involved in this effort and look forward to watching the progress of these two beautiful white oaks.”