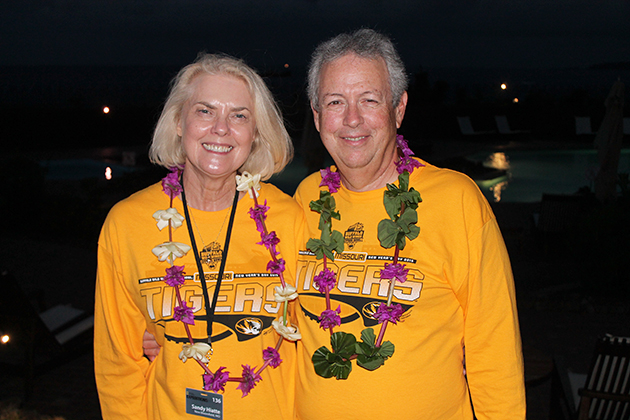 Sandy and Pat Hiatte, generous Mizzou alumni — and world travelers, seen here “showing the colors” as they arrive on Easter Island on an around-the-world trip — have pledged a $2.5 million to Mizzou Botanic Garden, half of a $5 million estate gift, the remainder of which with go to MU’s J-school.

In November 2020, the University of Missouri announced a $5 million estate gift from Pat and Sandy Hiatte of New Bloomfield, Mo., to be split equally by Mizzou Botanic Garden (MUBG) and the School of Journalism. It is the largest gift committed to MUBG in the campus garden’s 22 years of existence.

Both alumni of MU, Pat received his bachelor’s in journalism in 1973. A year behind Pat in their Jefferson City high school, Sandy attended Lincoln University for two years to save money before studying social work at MU.

Pat said he didn’t gravitate naturally toward journalism, but it seemed an open door to his imagined future.

“It was a given that I would attend college,” Pat said. “Like most kids, I wanted to be a scientist, and I always wanted to be a railroader. Journalism was a way to gain exposure to a lot of things and a lot of people.”

While attending Journalism School at Mizzou, Pat worked summer internships at the Tampa Bay Times where a job awaited him upon graduating from MU. Sandy put completing her degree on hold to move there, and the couple worked and saved money so she could continue her education.

“I worked the 5 p.m. to 2 am. shift at the Times for two years,” Pat said. “One day I left work and just decided I would pursue railroading.” 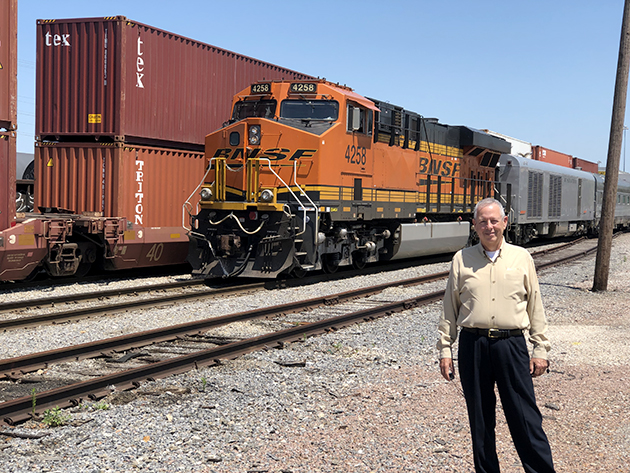 Pat Hiatte enjoyed a 35-year career with BSNF Railway and its predecessors.

“I became a trailing spouse,” Sandy said. We moved every two or three years as Pat built his career,” she added, reciting the five states the couple lived in. They settled in North Texas when Pat was transferred to corporate headquarters, where the couple lived for 20 years. Along the way, Sandy worked in increasingly more responsible healthcare human resources jobs. The couple retired in 2009 and moved back to Central Missouri to live closer to their elderly parents. Sandy’s mother and Pat’s father have since passed away but, Sandy said, her 88-year-old mother-in-law “Zooms with the best of them.”

The root of gardening

Sandy’s father provided her with a first exposure to gardening.

“My father had a vegetable garden everywhere we moved,” she said. “We moved around a lot in southern Missouri before moving to Jeff City in 1967, where he worked as an educator for the Department of Corrections.

“In the early days of our careers, Pat and I were busy and didn’t have time to pay attention to gardening,” she said. But eventually, gardening found its way into their lives, even though North Texas isn’t the most hospitable of gardening sites.

“If you can garden in Texas, you can grow something anywhere,” said Sandy. She became a Master Gardener in the Lone Star State in 2003 where, she said, the group even made house calls to gardener’s homes.

“Questions were mostly about trees,” Sandy said. “We start out with the tree and then extend to the entire yard. We had so much fun doing it.”

In reference to his behind-the-scenes role as a “Master Gardener spouse”, Pat joked that they called themselves “semi-intelligent gardening tools” for their support roles in the group’s gardening activities.

Sandy has continued working with the Master Gardener program in Jefferson City as well as a local Federated Garden Club and also has become a certified landscape designer. She said she likes the togetherness of gardening.

“Gardening is a nice activity for couples,” she said. “You feel good having worked in the garden together.”

The Hiattes are living on Pat’s family farm near New Bloomfield, which they hope to have named as a Century Farm sometime in the future. And though, Pat said, his grandfather always had a vegetable plot, he and Sandy have little luck growing vegetables because of the wildlife that share their space. The non-vegetable garden, however, is a different story and, Pat said, “it just keeps getting bigger.” 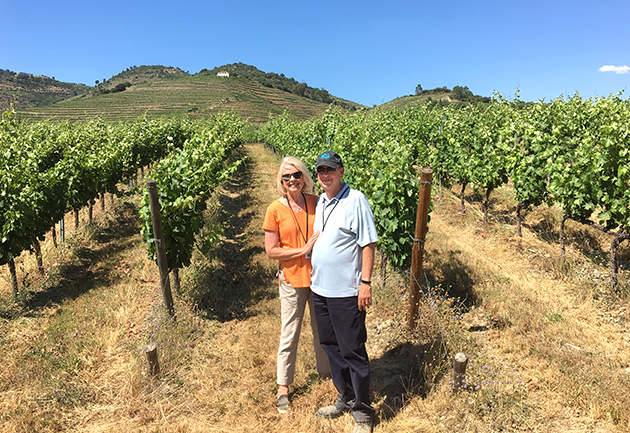 Sandy and Pat Hiatte have traveled extensively, shown here in Portugal — one of their favortie spots — where they posed during a visit to Qunta da Roeda Winery in the Douro Valley.

“Sandy is expanding the garden into a shaded area – a woodland garden,” Pat added and noted that adapting to a very wet spring in 2020 challenged and expanded Sandy’s gardening skills.

Railroading was more than just a career for Pat. It also has been his hobby. In addition to his N-scale model railroad, which recreates the Missouri Pacific Railroad between Jefferson City and Sedalia in 1962, Pat writes a heritage railway column for The Cowcatcher magazine. He enjoys the historical research and sharing his findings with other enthusiasts.

Both Pat and Sandy love to travel and have traveled extensively since their retirement. They are especially impressed with Portugal, which they discovered on a National Geographic Tour. They got along so well with their National Geographic tour guides, that one of them has reserved the villa next door to his own for them when they are ready to move there.

“We never really were not connected to Mizzou,” Pat said. Our families were here. We’d come back to visit and go to games. It’s always been a part of our existence.”

“After we moved back to Central Missouri, Sandy said, “I became more and more aware that Mizzou was a botanic garden from talks that Pete Millier [MUBG director] gave to my gardening groups. They were so informative. The quality of the botanic garden that also is the MU campus is impressive.

“Pat has referred to the campus garden as a laboratory because several fields use the gardens for learning activities,” Sandy said. “We wanted our gift to support education, so besides supporting the J-School, a gift to the garden also meets that goal.

“We’ve been very fortunate in our careers and we don’t have any children. This just seemed the obvious thing to do.”

Shots of MU Alumni Sandy and Pat Hiatte on some of their international travels. The pair made a $5 million estate gift to MU, to be split evenly between Mizzou Botanic Garden and the School of Journalism. Left to right, Not all transportation in the Gobi Desert is by camel or horse; sharing a toast to Antarctica on a Zodiac cruise; Moai stood guard ove the people of Easter Island and, Pat said, he and Sandy too.